Do new Russian laws affect us? Asking for, basically, all of us.

centreedge at Do new Russian laws affect us? Asking for, basically, all of us.
Originally posted by

misstia at Do new Russian laws affect us? Asking for, basically, all of us.
I just read this. Very first sentence says: "It is now illegal in Russia to distribute any images that depict President Vladimir Putin wearing makeup and implying he is gay." Emphasis mine. I'm not IN Russia. Yet LJ is. So does that mean WE can't post such depictions, even if we are not in Russia? Or would that be okay if our community was a paid account, since that user agreement didn't apply to paid accounts? But of course the English user agreement wasn't binding, only the Russian one was. We've all started to learn Russian, right?

Perplexing isn't it? And why is Putin so concerned being depicted wearing makeup? Or implying he's gay? Oh wait, right, right, he's a homophobic dictator. And if Mother Russia is gazing at this post, the views expressed in this post are mine and mine alone. I'm Miss Tia residing in the Land of Misfit Toys, Akron, OH, USA. I've been here since 2004, but I'll be damned I kowtow to anyone, especially homophobic bullies such as Putin.

Wanted to let y'all know of this new Russian law, as it might apply to some of us. Do we have ANY freedom of speech? Or only so long as we don't mock the sensitive little boy Putin? Waaaah! People mock me! 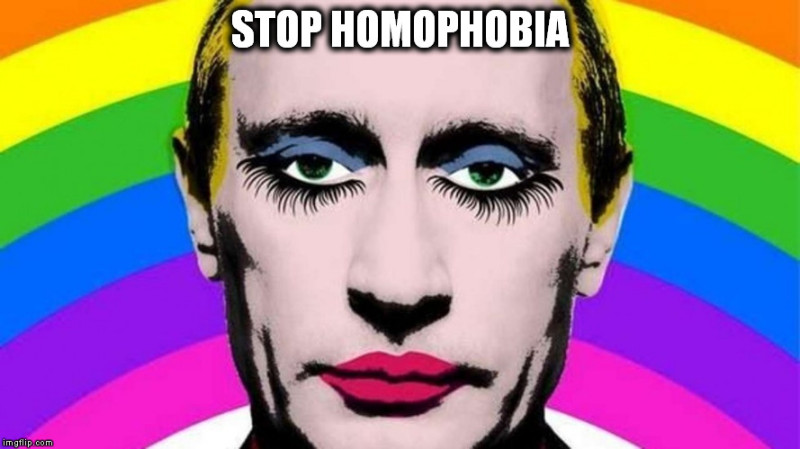